November 10 until March 9, Thursday Market is operating within its Winter Hours of 3-6 pm to accommodate the end of Daylight Saving.

Meet the Powers! Terry and Dani Powers have been bringing their honey to our markets for over three years now, and have been producing honey for over seven years. Between their locations in Algiers and Belle Chasse, Louisiana, the Powers take care of a total of 150 hives from which they produce pure, raw, and unfiltered honey. Alongside their 100% natural honey, Powers Beekeepers produces comb honey, beeswax, pollen, and beeswax candles made in a variety of beautiful and unique molds. Interested in beekeeping yourself? The Powers also teach a beginners beekeeping class at Sugar Roots Farm and sell nucleus hives - a small but established colony that's perfect for kick-starting a new beehive. Come this March, expect to see pollen back on Power’s market table alongside their weekly array of honey products. 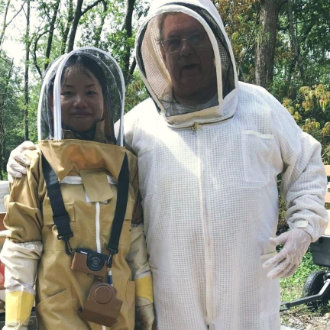 Thank You to All of Our Vendors!

Too Tall Farm and Nursery

Market Umbrella is an independent nonprofit 501(c)(3), based in New Orleans, whose mission is to cultivate the power of farmers markets to drive economic and community health in the region. Market Umbrella has operated the Crescent City Farmers Markets (CCFM) since 1995.